Many people use the standard Python debugger (pdb or ipdb) because it works well and can be used as a standalone tool or with your favorite editor. I’ve used it for years, but today I’m more productive using the PyCharm debugger. It can debug Python, JavaScript, and Django and Jinja Templates (making the debugging process seamless in web applications). Also, I don’t have to worry about leaving pdb.set_trace calls around anymore.

In this article shortcuts are written with the first letter of keyboard modifiers followed by the actual keys in lower case. The keys are presented for both OS X and Windows/Linux in the format (mac, win). For example, the shortcut (⌘-S-⌥-t, S-A-C-t) means to press the keys ⌘, Shift, Option, and t at the same time on the Mac, and Shift, Alt, Control, and t on Windows and Linux. When only one shortcut is presented, it will be the same on all operating systems.

If we haven’t run any code in our project before, the icons to run and debug will be disabled:

Some items will be disabled in the Run menu as well: 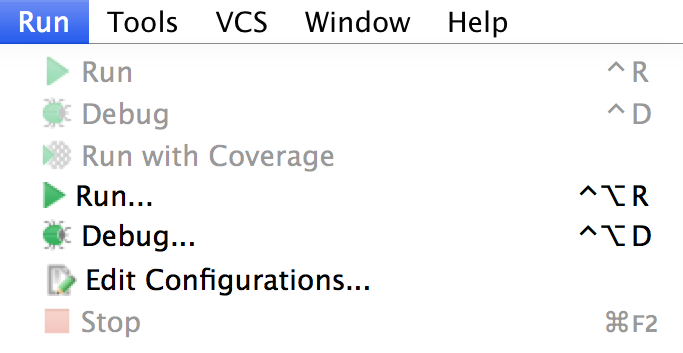 PyCharm will run the file and show a tool window with the results, if any. 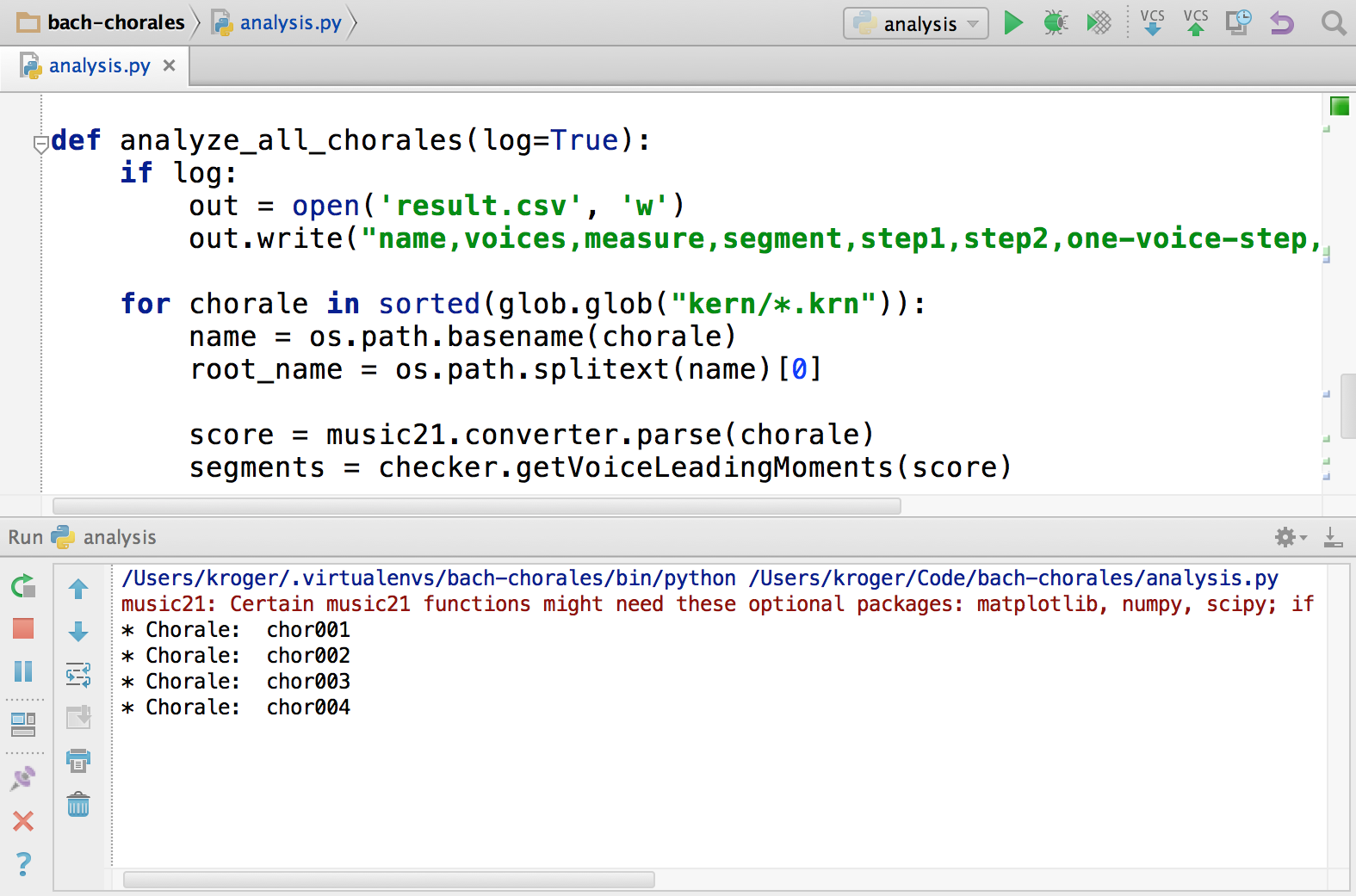 The Run tool window has many buttons to help us deal with the running script. We can do things like pause, stop, and rerun the script and move up and down the stack trace.

The following table summarizes the main actions. The manual has a complete description.

Once a script is run for the first time, it becomes available in the Run menu. PyCharm will show the most recently run command in Run→Run '<script name>' (C-r, S-F10), where <script name> is the name of the Python file without the extension (analysis, in our previous example).

This command will run the original file even if we are working on a different one. In our example, if we are editing a different file (say chorales.py) and type C-r on the Mac or S-F10 on Windows or Linux, PyCharm will run the file analysis.py, since this is the last file we ran. This is useful when we have a master script and are making modifications to a sub-module, for instance.

After we run the script for the first time, the related commands in the menubar will be available, and we can choose the script to run there:

PyCharm will create a new tab every time we run a script. If we don’t close the previous tab we may end up with many different tabs, so make sure you close each tab after running, and are, in fact, on the right tab. 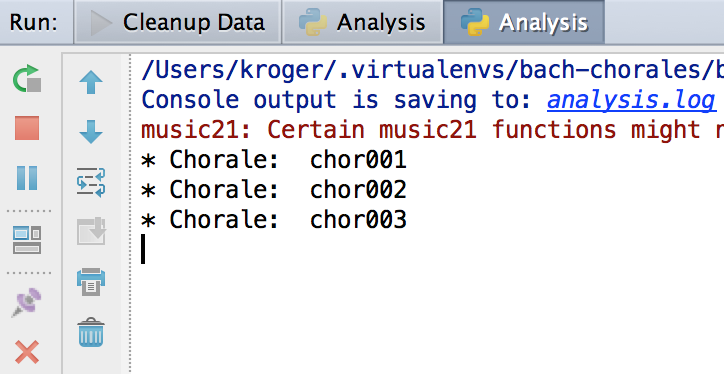 When we want to run things with more control we need to create a configuration by going to Run→Edit Configurations… and clicking on the + button (⌘-n, A-Insert). PyCharm will ask what type of configuration we want (that is, if we want to run a Python script, a Django or Pyramid server, and so on) and will show the appropriate options for each type. 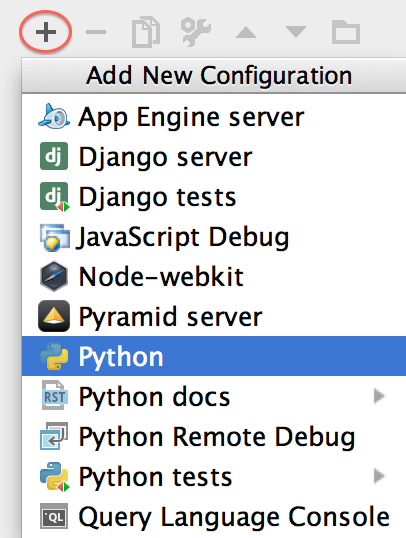 We can choose the script to run, passing parameters if necessary, the Python interpreter, and the working directory. We can also launch an external tool before running the script, which is great if we need to do things like data pre-processing. 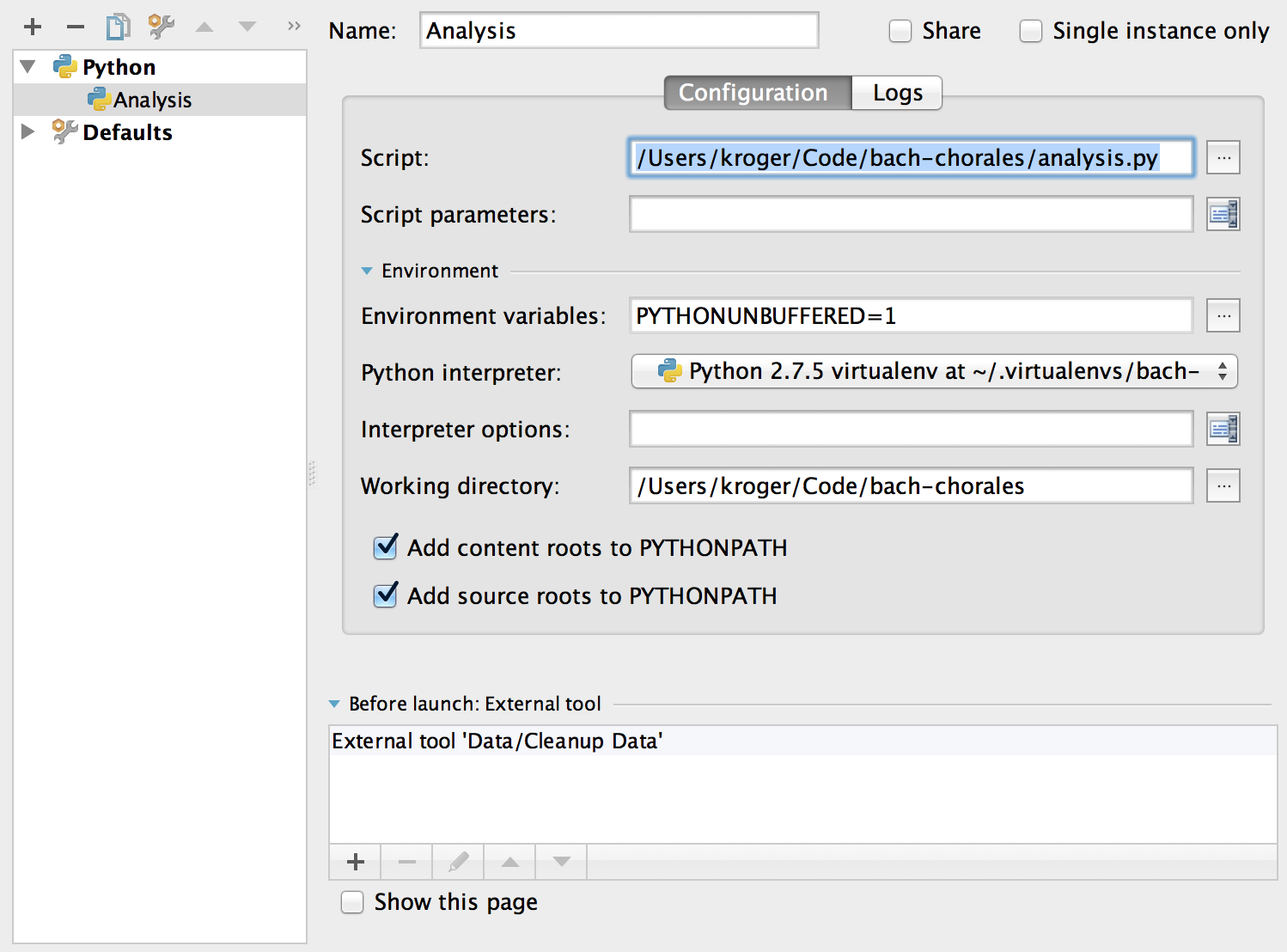 In the Logs tab we can add log files to be shown in PyCharm’s console during the script execution or save the console output to a file. 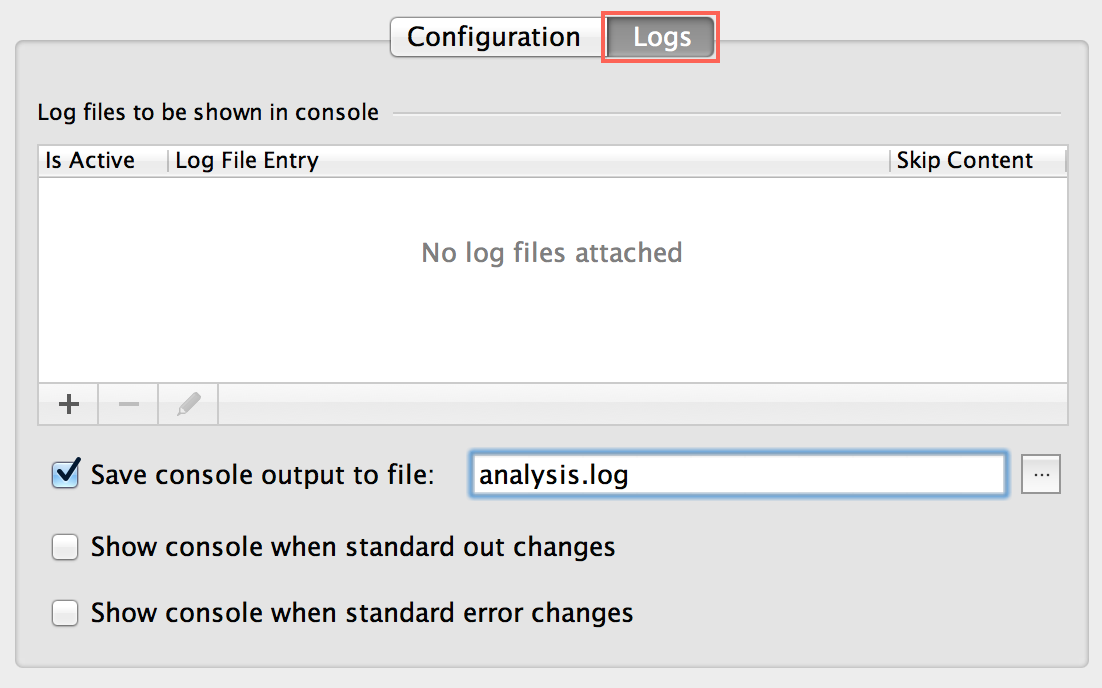 Naturally, we can have multiple configurations; we can switch between them by going to Run→Run… (⌥-C-r, A-C-r) and picking the one we want. 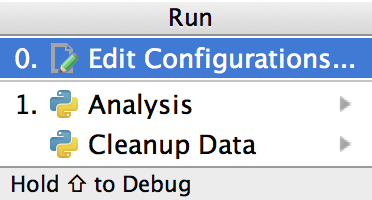 To debug code in PyCharm, we need to create a new configuration in Run→Edit Configurations… or debug an existing script by going to Run→Debug… (⌥-C-d, S-A-F9). After that it will be available in Run→Debug '<script name>' (C-d, S-F9), where <script name> is the name of the Python file without the extension (analysis, in our example). As you can see, it works just like running code.

Similarly to the Run command, the menubar will now be enabled and we can choose the script to debug by clicking on the insect icon.

One of the main differences between running and debugging a script is that in debugging we want to define breakpoints. In PyCharm, a breakpoint must be on a line with working code; it can’t be on a line that is blank or starts with a comment. We create breakpoints by clicking on the gutter on the left.

PyCharm’s debug tool window has everything we expect in a graphical debugger. From here we can navigate the call stack and inspect the data available in each stack frame. We can keep an eye on some variables by adding them to the watch list.

The debug tool window has many of the buttons we have seen in the Run tool window, allowing us to pause, stop, and rerun the script. In addition, we can view the breakpoints—also available in Run→View Breakpoints… (⌘-S-F8, S-C-F8)—and mute (that is, disable) all breakpoints.

The icons in the top right corner, allowing us to step in and out of the program, are the ones we will use the most:

In the following image, we can see each icon with its name. The table below shows the name, shortcut, and description for each icon.

The variables pane is a great way to explore complex data. It was invaluable when I was learning Django and getting acquainted with the HttpRequest object, for instance. In the following example, we can see some music21 data, especially the complex Score class. The Variables pane helps me to inspect attributes such as duration and elements. 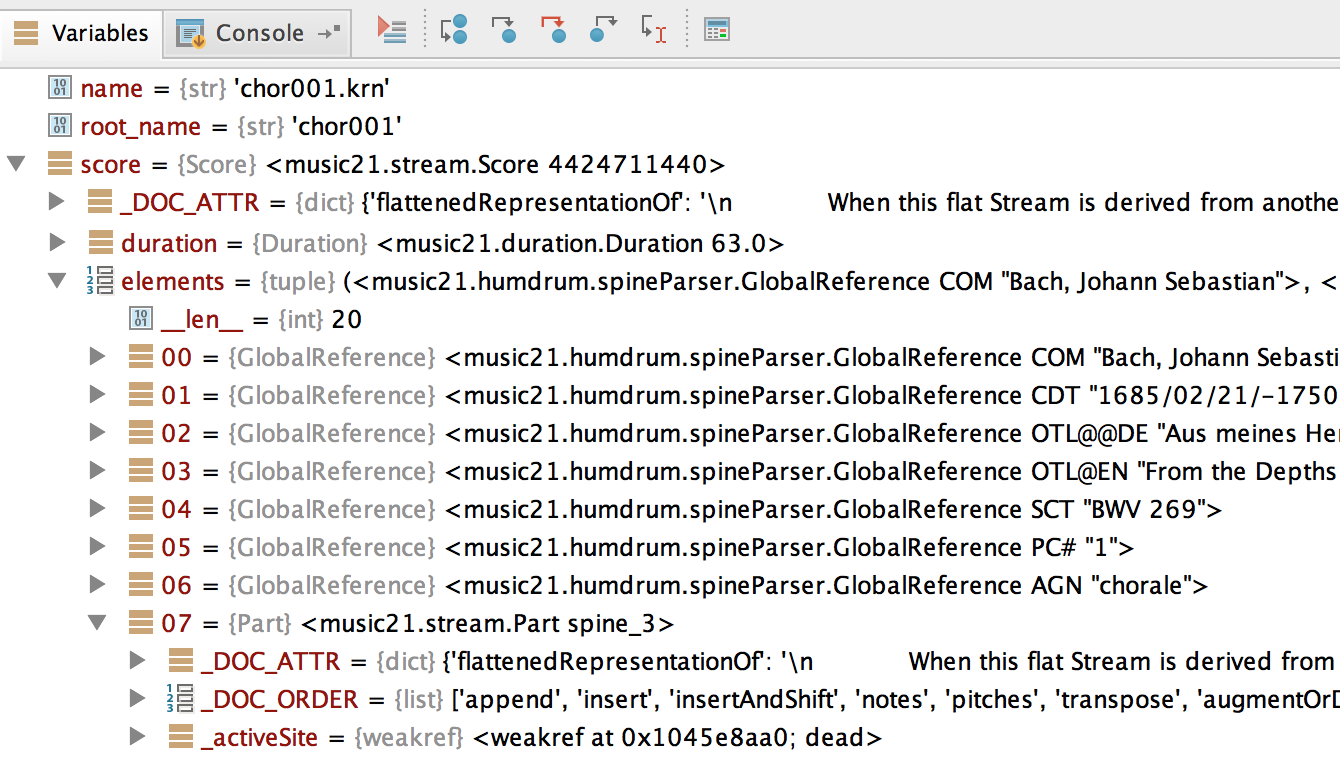 We can see all breakpoints in Run→View Breakpoints… (⌘-S-F8, S-C-F8). From here we can add, remove, or edit breakpoints; and set conditional breakpoints and log messages or expressions. 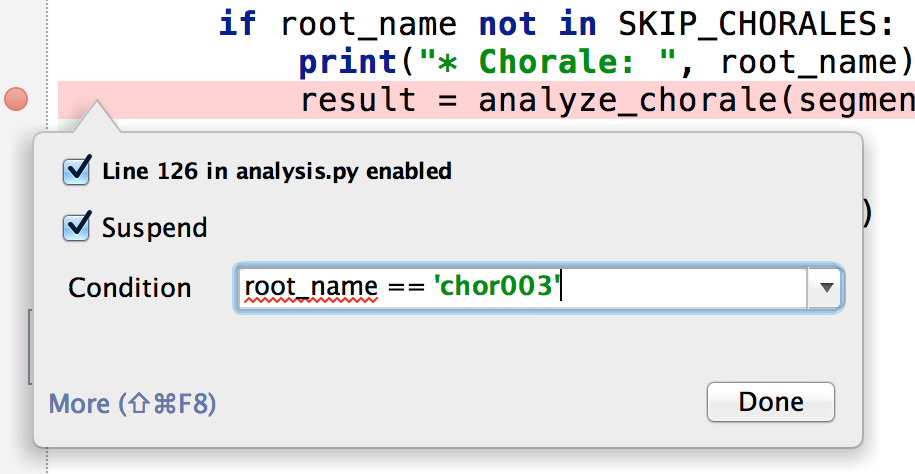 We can also see the breakpoints by selecting the Favorites Tool (⌘-2, A-2).

A quick way to disable a breakpoint is by clicking on it with the Alt key. The breakpoint icon will change.

Another way to disable a breakpoint is by right-clicking on it and unchecking the first option (“Line 93 in analysis.py enabled” in the following example).

Besides defining breakpoints when a line of code is reached, we can define a breakpoint that is triggered when an exception is thrown. To add an exception breakpoint, we go to Run→View Breakpoints… (⌘-S-F8, S-C-F8) and select Python Exception Breakpoint after clicking the + button. 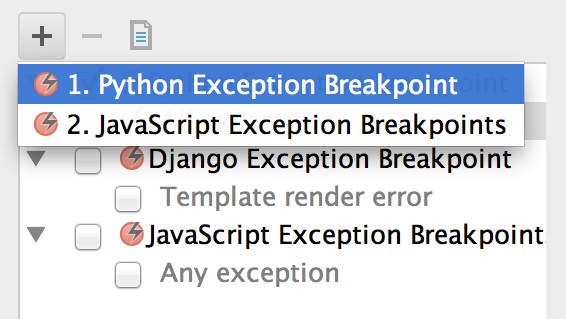 Our new exception now appears on the list, where we can customize it. 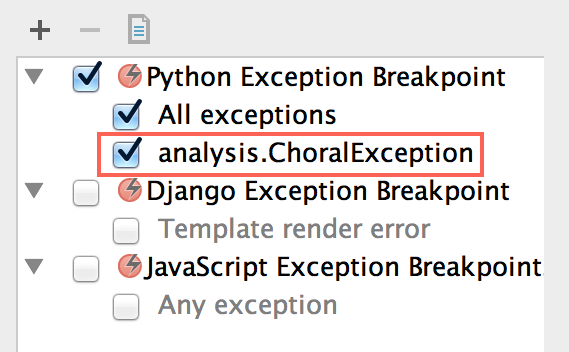 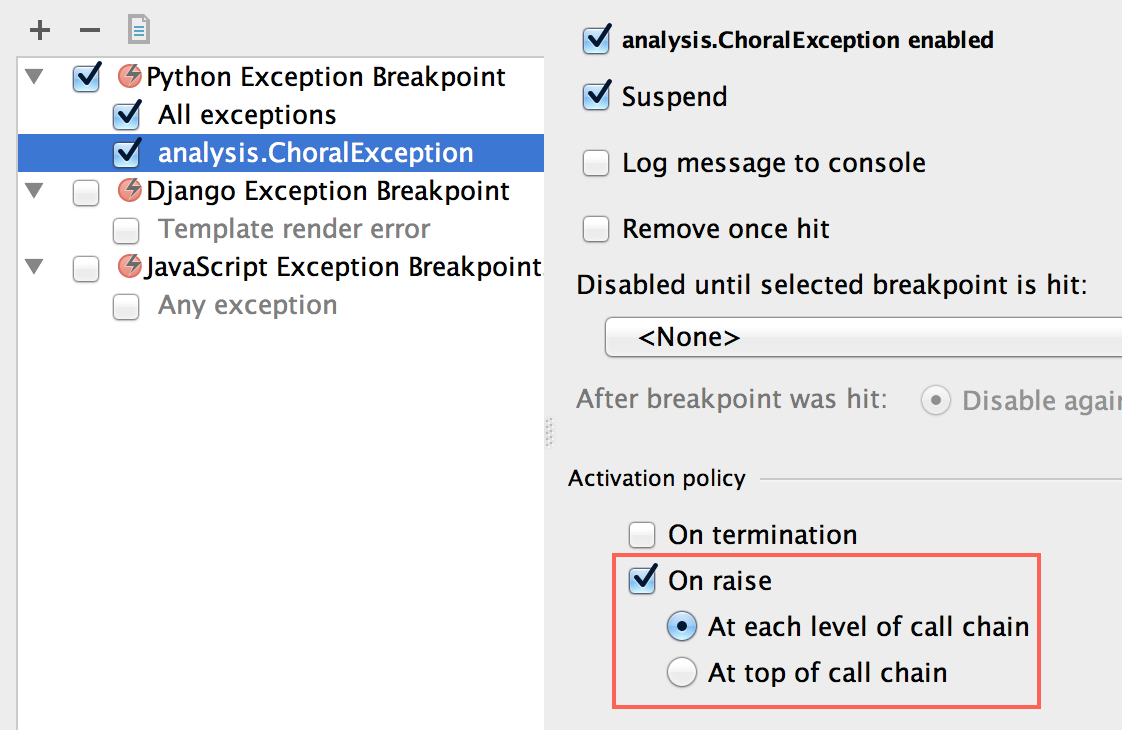 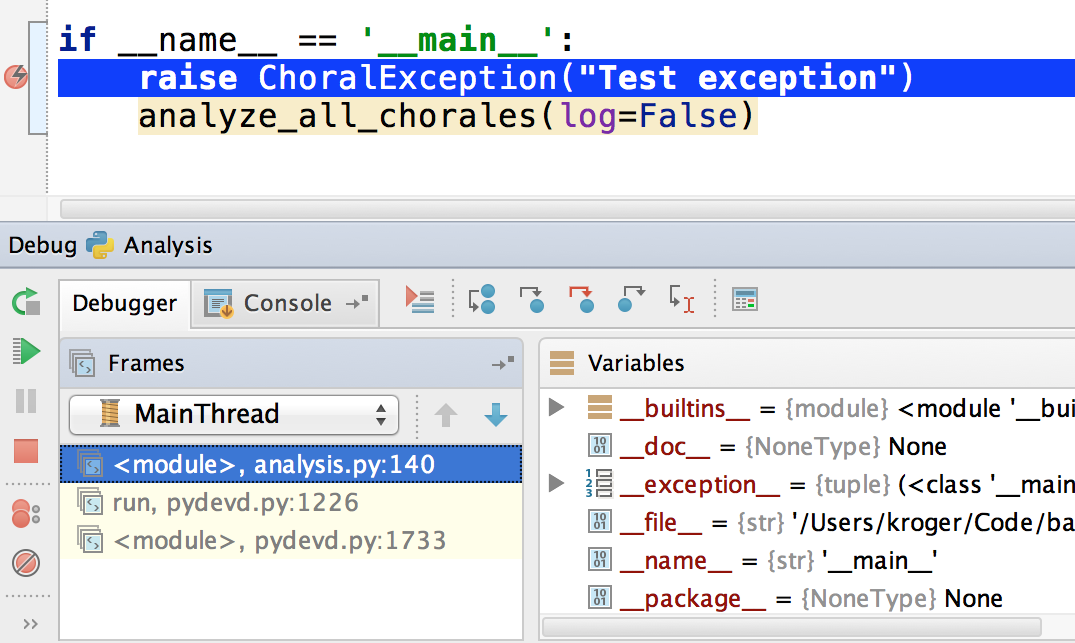 Sometimes it’s useful to be able to access a Python prompt while debugging. We can do this by clicking on the Console tab when the debugger is running and selecting the Show Python Prompt icon. 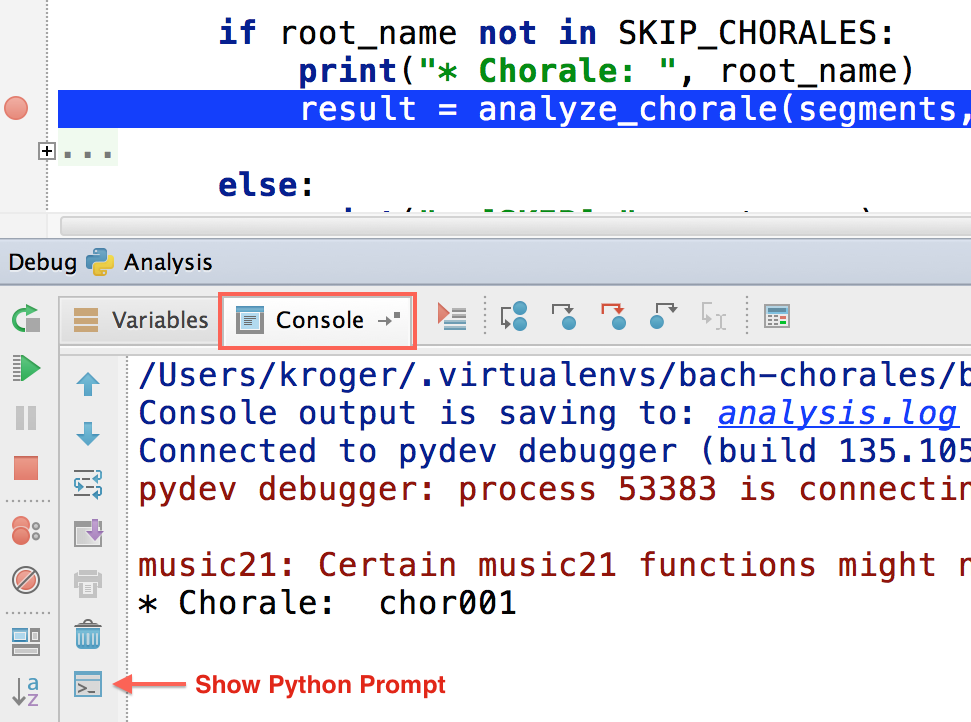 Now we can use the prompt to inspect and change the variables in the current scope. 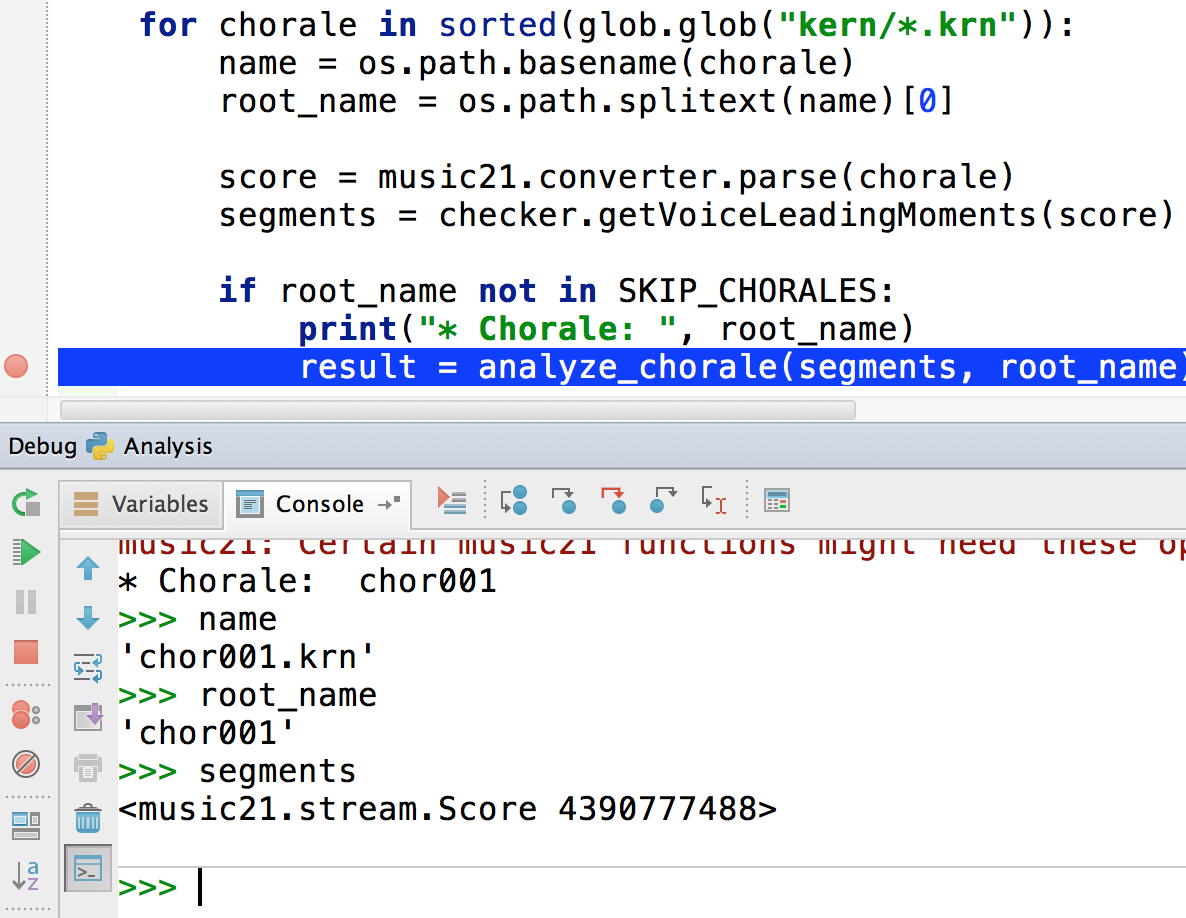 Although it’s super-useful to have a full Python prompt available while debugging, the Evaluate Expression feature may be sufficient if we just want to quickly evaluate an expression.

As expected, we can use any variable in the current scope:

If we select the Code Fragment Mode button, we can add multiple lines of code. Completion works here as usual.

The fastest way to inspect the value of variables while debugging is by hovering the cursor over a variable name. PyCharm will show the variable name and its value.

And, as expected, we can inspect and set a variable value by choosing the correct option in the popup menu on the Variables pane. 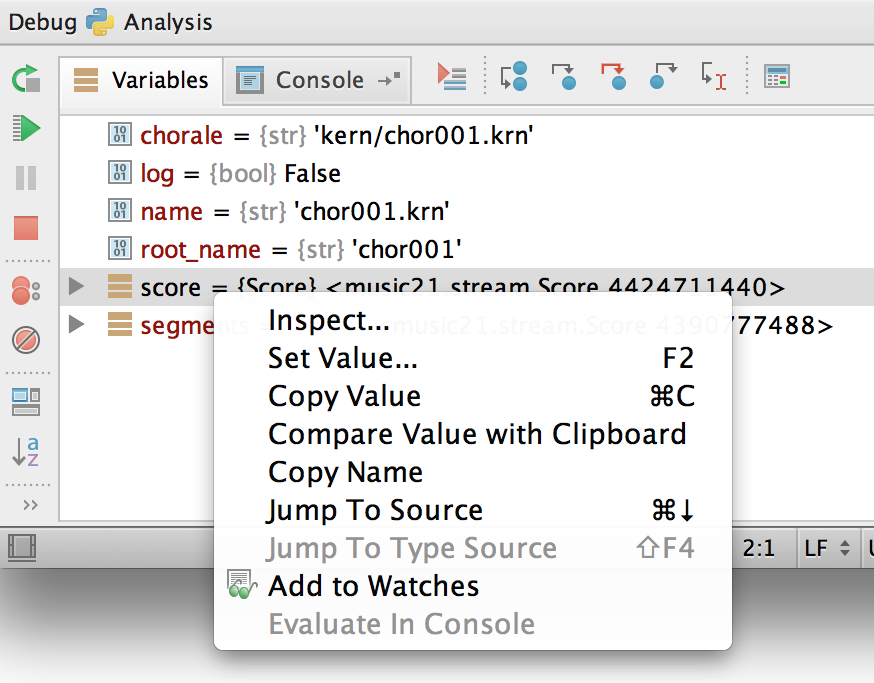 The same apply to watched variables; we can edit and inspect them by using the popup menu. 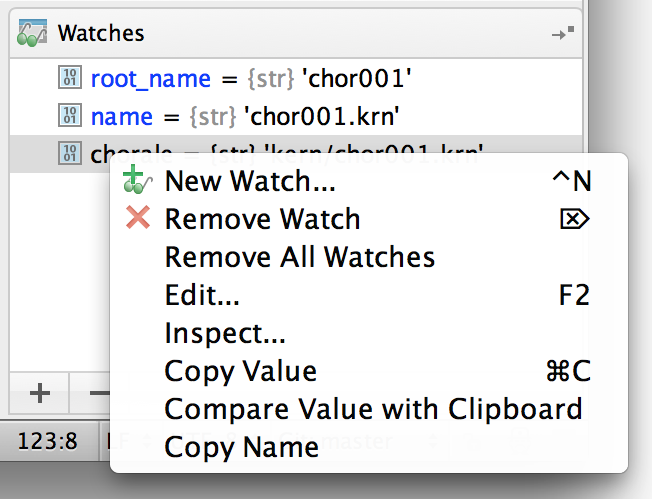 PyCharm has a debugger that is second to none. If you want to learn more about PyCharm and how to use it to debug JavaScript and Django templates, check my ebook, Modern Python Development with PyCharm.